Cloth and the Working Mom, pt. 1: Enlisting your daycare

The first obstacle that many two-income, would-be cloth diapering families find standing in their ways is the Daycare Question.

"Would any daycare or in-home sitter around here even do cloth?"

"My friend said her daycare told her it was against the law.*"

"We LOVE our daycare, and I just hate to ask any more of them."

Chances are, though, your daycare will be able to be persuaded, and if they're not amenable right now, they will be in the near future--as soon as they see how many potential cloth diapering families want to make use of their childcare services. After all, an estimated 25% of American families are cloth diapering now, and that number is growing! Being able to advertise as a 'green daycare' can only be a bonus in a competitive market.

Whether you're still in the interviewing stage or whether your baby is already enrolled in a daycare, there are a few things to shore up and square away before you start sending your cloth diapered baby to daycare so that everyone--you, the daycare's director, and your baby's teachers--feels confident that cloth will work and be easy.

*There are no states in which cloth diapers are illegal for accredited or licensed daycare centers to use; however, a handful of states (not Louisiana) require a doctor's note prescribing their use.

So what can you do ahead of time?

1) Request a meeting with the director and the teacher in charge of your child's classroom; strongly request that they meet with you at the same time so that everybody's questions are answered at once and each one gets the benefit of hearing the other's questions answered. 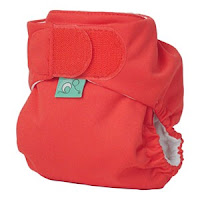 2) Bring in a demo. Bring a diaper to the meeting that goes on like a disposable (so no pull-ons or pins), and have it assembled already if it comes in more than one piece, like a pocket, AI2, or prefold trifolded into a cover. If you're using prefolds and covers, you might want to purchase a cover for every prefold in your daycare stash rather than requesting that a cover be re-used several times throughout the day. Keep it as close to disposable diapering as you can as a courtesy.

3) Bring in your baby--or a baby doll--as well as a wet bag. Demonstrate a diaper change from start to finish! Let them know whether you'd prefer them to remove a pocket diaper's insert with their gloved hands immediately after the diaper change or whether you'll take care of that when you get home (more painful for you, but less work for them!). Show them how to fold the diaper in half before putting it in the wet bag, rather than rolling it up--this is especially important for a #2 diaper, as I'm sure you can imagine. On that note...

4) Be prepared with clear answers to the poop question. It's best to tell them, "Don't worry about the poop. I'll take care of it when I get home." Some daycares, especially corporate ones, will have company-wide regulations about cloth diapers that include the workers not being expected to remove feces from the diaper to put it in the toilet, as this takes extra time away from the children they are minding and can just plain (and understandably!) gross them out--even more than having to change dozens of diapers a day. As long as the only difference between a cloth diaper change and a disposable diaper change is where the diaper goes (in a wet bag rather than in a trash bag), they simply can't object! If the daycare assigns each child a cubby hole or a hook, have them keep your wet bag there.

5) Let them use disposable wipes. They'll throw them away with the disposable diapers and wipes they'll be using for other children, and it will be easier for them than worrying about a wipe solution. If environmental friendliness is paramount to you, gWipes are biodegradable and made with friendlier materials than the leading brands.

6) Provide ample, mess-free cloth diaper-safe diaper rash treatment. We love the soothing simplicity of Butt Balm by hosie naturals. Request that the balm only be used when your baby's diaper area is irritated, not as a matter-of-course 'just in case' barrier treatment. Even a cloth diaper-safe balm can be used too often and lead to build-up being left behind on your diapers; it's also just not as frugal to use it when it isn't needed. Cloth diapers are chemical-free and gentle on your baby's skin... No barrier necessary!

7) Send your baby with only one style of diaper. A single brand might make it even easier, but if you have a varied stash because you're still finding out what you like, try to pack the same style of diaper every day. If you're sending a diaper with a snap closure, include a diagram paper-clipped to the diaper that indicates which snap settings will best fit the diaper to your baby--with a friendly note about how you wanted to make the diaper change quick and easy for them!

Want to hear a daycare experience straight from a cloth diapering mom's mouth? We'll wrap up the first installment of Cloth and the Working Mom with Jill's tale:

"When I first approached the owners of our daycare [about cloth diapers], the answer was pretty much no--but I didn't have a ton of information to give them. I was determined to switch to cloth anyway, so I scheduled a playdate with an old friend who happened to be an eLeMeNO-Pee rep hoping that we could catch up and I could watch her with her son's cloth diapers. After that playdate, I switched to nighttime cloth to get my feet wet.

The local newspaper ran an article about modern cloth diapers featuring that rep right around that same time. I planned on bringing them the article, but instead... they gave the article to me and said that it had convinced them to give cloth a try! They've been cloth diapering my children ever since.

I only bring pocket diapers to daycare so as not to confuse them with all the different ways to cloth diaper. I bring a large wet bag, and they keep it in the diaper bag. At each change, they simply fold and put the dirty diaper in the wet bag. They save the poop for me to deal with; it's really not a problem if you see to it as soon as you get home. The daycare provides wipes, so they use disposable wipes instead of cloth.

All the teachers at the daycare know how to use our diapers and don't seem to have any problems. Every now and then I have to give a lesson on why the diaper leaks (from compression) if they put it on too tight, but overall, I'm pleased to say they do a great job with cloth!"

Next week we'll cover the nitty-gritty: the logistics of working outside the home with a household maintenance routine that includes cloth diaper laundry!
Posted by Laura at 5:36 AM